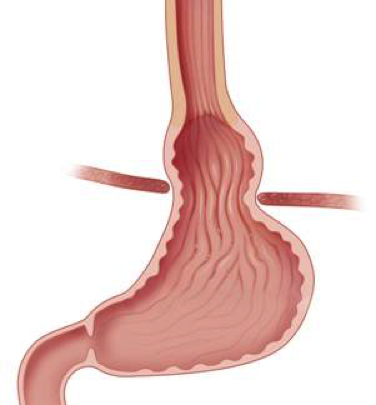 Gastroesophageal reflux disease (GERD), also known as acid reflux or heartburn, is a condition that affects up to 17 million Americans. It occurs when secretions from the stomach back up or reflux into the esophagus, the tube that connects the mouth to the stomach. The secretions typically have a high concentration of acid and act by irritating and inflaming the esophagus. It typically causes a harsh, burning sensation in the chest or upper abdomen, and can radiate throughout the chest or up to the throat. It can cause other symptoms as well including difficulty swallowing, chronic coughing, sour taste, bad breath, vomiting, wheezing and erosion of tooth enamel. Over time, these secretions can cause permanent damage to the esophagus and lead to narrowing or stricture of the esophagus, ulcerations, metaplastic changes (Barrett’s esophagus), and even esophageal cancer. Normally, a circular band of muscle called the lower esophageal sphincter (LES) acts like a one-way valve and only opens when swallowing. The LES should otherwise remain closed and prevent the back up of any stomach secretions into the esophagus. If the LES becomes weakened or abnormally relaxes, the stomach secretions can reflux up and cause the associated symptoms. These changes in the LES can also be exacerbated by the presence of a hiatal hernia. This occurs when a portion of the stomach protrudes through the diaphragm and goes up into the chest.

How is GERD Treated?

There are generally progressive steps in the treatment of GERD 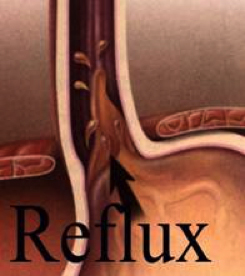 There are now numerous published articles showing surgery to be superior to medication in the treatment of gastro-esophageal reflux disease. Surgery has been shown to provide long-term relief of symptoms in approximately 96% of patients. It is felt to be the superior treatment in many instances such as Barrett’s esophagus. Patients are generally evaluated using a combination of upper endoscopy, 24-hour pH studies, manometry and barium X-rays. We will be happy to talk to you further to see if you are a candidate for a laparoscopic fundoplication for reflux disease.

In most cases, a procedure called a fundoplication is performed to correct the gastroesophageal reflux. The upper portion of the stomach (fundus) is wrapped around the lower portion of the esophagus. This is usually a complete placation or wrap and is often called a Nissen fundoplication, although certain individuals may only require a partial fundoplication. The wrap acts to restore the natural antireflux barrier, thereby preventing esophageal acid exposure. The procedure is very effective in preventing reflux and provides long-term relief of symptoms.

This procedure is now routinely performed laparoscopically, using several small incisions instead of one large incision. This allows less pain, smaller scars, and a quicker recovery. Patients are able to go home after surgery and return to their normal activities over the next 1-2 weeks.

Johns Creek Surgery, PC, located in Johns Creek, GA, attracts patients from all over the metro Atlanta area and beyond including Duluth, Alpharetta, Milton, Roswell, Gainesville, Canton, and Marietta, GA. Our board certified surgeons, Dr. Christopher Hart and Dr. William H. Johnson perform medical procedures or surgeries that do not require an overnight stay.